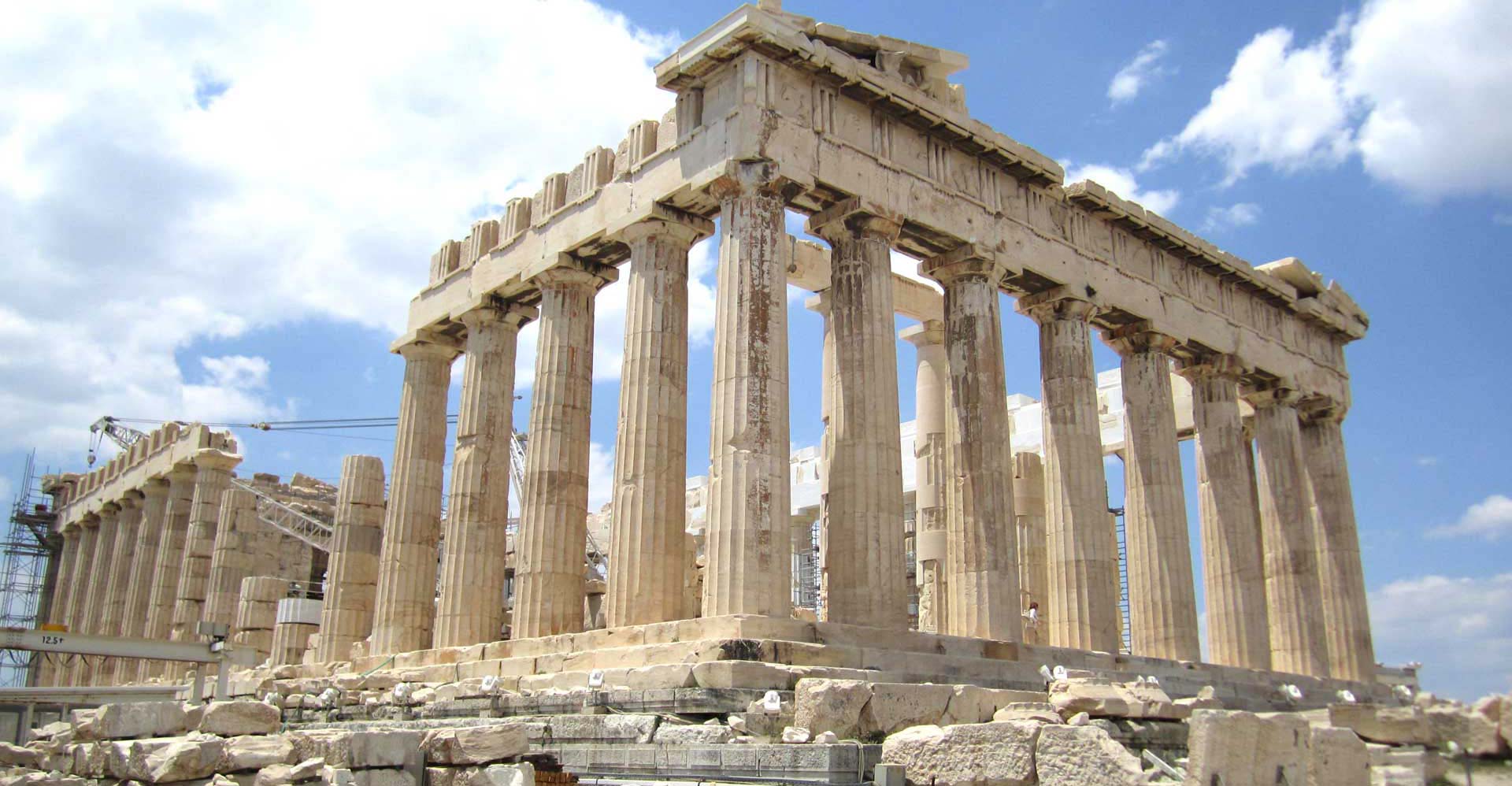 Athens, Modern Greek Athínai, Ancient Greek Athēnai, historic city and capital of Greece. Many of Classical civilization’s intellectual and artistic ideas originated there, and the city is generally considered to be the birthplace of Western civilization.

Athens lies 5 miles (8 km) from the Bay of Phaleron, an inlet of the Aegean (Aigaíon) Sea where Piraeus (Piraiévs), the port of Athens, is situated, in a mountain-girt arid basin divided north-south by a line of hills. Greater Athens has an area of 165 square miles (427 square km). The Kifisós River, only a trickle in summer, flows through the western half; the Ilisós River, often dry, traverses the eastern half. The surrounding mountains—Párnis, 4,636 feet (1,413 metres); Pentelicus (Pendéli), 3,631 feet; Hymettos (Imittós), 3,365 feet; and Aigáleon, 1,535 feet—add to the impression of barrenness. Yet such considerations are superficial when compared with the fecundity of Athens’s bequests to the world, such as its philosophy, its architecture, its literature, and its political ideals.

Some three centuries after the death of Pericles (429 bce), Athenians entered upon a period of bondage that lasted almost 2,000 years. The city was freed in 1833, and in the following 170 years it was the scene of more than a dozen revolutions, another brutal foreign occupation, and a civil war of especial savagery. This long history of passion and suffering has had considerable effect on the Athenian character. The core of that character is an implacable will to survive, buttressed by a profound sense of loyalty (especially to the family) and patriotism. The Greek Orthodox Church, which is directed by a synod sitting in Athens, was a main force in keeping alive the Greek language, tradition, and literature when such things were forbidden, and most people still support it.

The millennia of oppression, instead of driving the Athenians into obtuse moroseness, have honed their wit and rendered them tough but supple, while centuries of privation have only preserved their warmth and generosity. The long oral tradition, alive even under the invader, has reflected and stimulated a taste for rich talk. Of course, the poetic impulse to make a good story better leads to considerable exaggeration in daily conversation, suiting a vanity that goes with a sharp-edged sense of personal and family honour and the spoiling of children. The ancient heroes, too, were vain about both themselves and honour, boasting as much about outwitting the enemy as about outfighting him.

In 1833 there was almost no Athens at all. During the fight for independence, it had been entirely evacuated in 1827, and six years later it held perhaps 4,000 people in the straggle of little houses on the north slope below the Acropolis. The newly imported king of the Hellenes, Otto, the 18-year-old son of Louis I of Bavaria, was installed in the only two-story stone house, while his German architects hurried ahead with plans for a palace and a new Athens far out in the fields.

Below the well-sited but very plain palace, a large garden square, Síntagma (Constitution) Square, was laid out. Today it is garnished in the tourist season with some of Europe’s most luxurious cafe chairs, and at all seasons it is hemmed in by tall new buildings and elderly luxury hotels. Broad avenues were created and are still the city centre’s principal thoroughfares (Stadíou and Panepistimíou [Elefthérios Venizélou]), between which an orderly grid of narrow side streets was laid out.

Character of the city

Athens, with its tall buildings and contemporary shops, is the first European city when approached from the Middle East. When approached from the west, from elsewhere in Europe, what strikes the visitor is the influence of the East—in the food, music, and clamorous street life—perhaps vestiges of a time when Athens was divorced from European society under the yoke of Ottoman rule. Nevertheless, it is wrong to say that Athens is a mixture of East and West: it is Greek and, more particularly, Athenian. The city, after all, nurtured Western civilization thousands of years ago. Athens remains on the world stage to this day.

Notably, in 2004 the world came to the city for the Olympic Games, which spurred a dramatic makeover for Athens. In addition to building a raft of new sports venues and facilities (including a stadium designed by Santiago Calatrava), Athens undertook massive transportation infrastructure improvements that included dramatic expansion of public transportation and the construction of a new international airport.

The climate of Athens is benign: frost is rare (the minimum temperature is 32 °F, or 0 °C) and snow seldom lies, while the summers, though hot (maximum temperature is 99 °F, or 37 °C), are dry, and a fresh northeasterly wind often blows by day. The nights are cool. The climate of the city permits outdoor activity the year round and has had an important effect on both the style of architecture and the life and political institutions of the city.

The housing that developed was generally the sort of architecture familiar in Victorian London: solid, porched, rather imposing, the later imitations graceless and monotonous. In Athens it is called the Ottonian style, but there is little of it left as the centre encroaches on old residential areas.

Once the new capital was established, the city grew at a regular rate of about 7 percent a year, soon reaching 50,000 inhabitants, a figure not much exceeded in the days of Athens’s greatest power and glory. By 1907 the municipality had a population of 167,479. Omónia (Harmony) Square had been built at the western end of the two main streets, with other broad avenues radiating from it, but it did not develop as the hoped-for balance to Síntagma.